TV Comic is a far more long-lived title than people realise and fantastically collectible for the number and variety of TV characters featured from Supercar and Fireball XL5 to The Avengers and Doctor Who. There are also a number of very collectible free gifts.

The high point for most collectors is the Doctor Who strip that began with issue #674 dated 14th Nov 1964 with the William Hartnell incarnation. A nice high grade copy of this sold on eBay UK in Feb 2011 for a staggering £171!

With thanks to Steven Adamson for some great free gift pictures as ever.

TV Comic is also known for its Star Trek reprints. Here is some brilliant research by Shaqui Le Vesconte:

Star Trek was introduced in Polystyle Publications' TV Comic when the title became Mighty TV Comic with issue #1292, dated 18 September 1976. The Star Trek comic strips were serialised b&w reprints of Gold Key Star Trek comics and over the next two years, worked their way through seven of the first nine stories, with the other two appearing in Star Trek Winter Special late in 1976. Initially, each page of art was enlarged to fill the entire A3 tabloid newspaper format, resulting in somewhat crude reproduction, and requiring a masthead squashed along the top of the first panel. From issue #1298, the art was reduced to a size consistent with earlier reprints in the World Distributor annuals, and given a surrounding frame with photos of the Enterprise, Kirk, Spock and the other main characters - including Chekov, who did not appear in any of these Gold Key comics. This frame underwent a revamp, filling the whole spread from issue #1312, and remained for the duration of the run.

The Star Trek strip was quite nicely promoted by full colour photos on Mighty TV Comic covers until the publication resumed printing comic strips on the front page from issue #1323. Late in 1977, the title reverted to TV Comic from issue #1353 and in spring the following year, returned to a standard A4 comic format from issue #1377. In order to bring the Gold Key reprints to an end shortly after, the final pages of The Legacy of Lazarus were abridged to a rushed conclusion, ending with issue #1381, dated 3 June 1978. 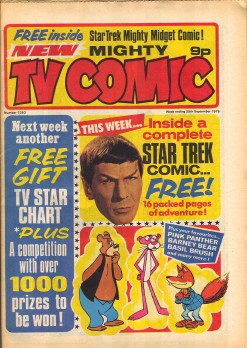 #2 1976
Star Trek Mighty Midget Comic
Polystyle Publications
16-page 8 1/4" x 11 1/4" comic distributed as a free insert with Mighty TV Comic #1293, 25 Sep 1976. Contains an abridged b&w version of Gold Key #26. Also has a b&w photo of Kirk on the inside back cover. Described in the indicia as New Mighty TV Comic No. 2 Mighty Midget Star Trek. Although similar to the original Gold Key cover art by George Wilson, the Mighty Midget cover was repainted by John Canning, an artist with a distinctive style who worked for TV Comic for over 20 years. 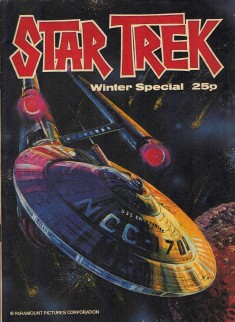 Total value for all issues of this title listed:


Note: some PR issues may have no value. Selected issues in FN, VF or VF/NM may not exist in some titles.